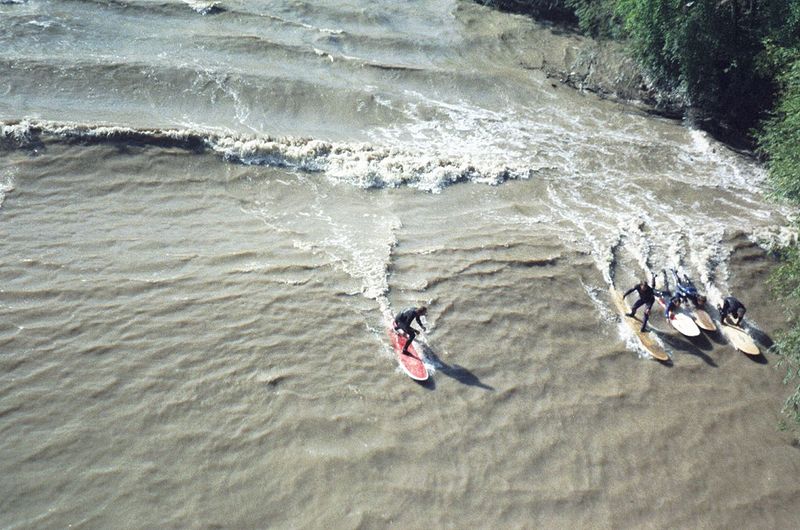 The 2011 world record for the longest wave surfed was engulfed by four professional surfers in July of 2013, fueled by the tidal bore on the Petitcodiac River in New Brunswick. Yassine Ouhilal of Halifax, Fred Hamilton of Sooke, British Columbia, and two California surfers easily surpassed the previous eight kilometer record with a whopping 29 kilometer ride from Belliveau Village to the Causeway in Moncton. Hamilton and Ouhilal spoke to the Moncton city council, and are bringing news of their record-breaking accomplishment to the doorstep of the world. Thousands of people, including many Monctonians and Councilman Brian Hicks, lined the shores of the Petitcodiac River to catch a glimpse of the athletes gliding towards their goal.

Hamilton and Ouhilal will have their incredible story featured in The Surfer’s Journal, one of the top magazines on surfing. The article is expected to run in July, and will be supplemented by photos from Ouhilan himself, doubling as a professional surf photographer and filmmaker. The two surfers from California will be acknowledged for their contribution to the current world record on ABC’s Nightline, in January. Ouhilal and Hamilton took to the river for one last wave in 2013, preemptively cashing in the council’s official invitation to return next summer and surf the bore again. The surfers’ achievement is gaining international traction, so keep on the lookout for an annual festival in the future.

An “Oasis of Comfort” in Algonquin Park

Have a Holiday on Horseback with Warner Guiding & Outfitting

A History of Family Fun at Wilderness Presidential Resorts

All-Inclusive Family Fun is a Tradition at Oak Cove Resort

Find Branson Fun for Everyone at Castle Rock Resort & Waterpark