The dreamy sleep of winter lifts. Spring takes its turn. And as the rest of the nation wakes, the South slings on its golf bag. In Southern Arizona, spring springs early.

And, the spring season is the best time to sample all the resort has to offer. Golf the three famous 9s seen in Tin Cup, a classic underdog golf flick featuring Rene Russo and Kevin Costner. Unwind at the Tucson Salon & Day Spa, a 4,000-square-foot desert oasis specializing in indigenous Southwest techniques and featuring six treatment rooms, in and outdoor lounges, hot tubs, a sauna, and a steam room. And, dig into unique Mexican specialties and simply perfect steaks 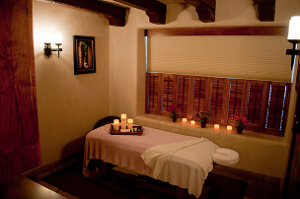 from the Stables Ranch Grille or Alfresco dining, once the favored feeding grounds of Hollywood’s western movie stars Stewart Granger and John Wayne.

Star of Arizona’s South, the resort has enjoyed decades of fame; yet its 500 acres of sun-dappled Cottonwoods and manicured golf grounds somehow remain uncrowded.

“Tubac is still relatively unknown and reminds me of Santa Fe and Sedona in the 80s," Public Relations Director Patti Todd said. "First time guests are impressed with the beauty of the location and the resort.”

Tubac is nothing if not idyllic of Arizona’s pristine Southwest territory. Rich in Southwest decor and Spanish Colonial architecture, this newly renovated resort includes a four-acre cluster of Hacienda Suites, Casitas, Posadas, the historic Otero House, and a 17th-century replica chapel. And 2005’s $40 million renovations and expansion headed by Ron Allred - the man who made Telluride a household name - only added value to vision.

Testify to Tubac’s greatness for yourself and explore the ideal 70-degree spring temperatures of Southern Arizona on an outdoor adventure, Village of Tubac exhibit tour, or golf game at one of Tubac Golf Resort & Spa’s triple 9’s.

In spring, the Tubac Golf Resort & Spa advantage is yours.

Lodging in or near Tubac

Feel Good Inside and Out At Woodloch Resort

Year-Round Romantic Retreats at Geneva on the Lake

Home for the Holidays at Villa Roma Resort